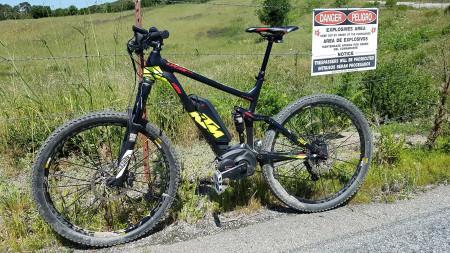 Can’t say I saw this coming, but when I knew I was headed to the Sea Otter classic without a bike but with an invitation to ride an E-bike, I thought, what the heck. It beats not riding at all. But more importantly, I thought it a good idea to ride one of these new rigs just so I could justifiably rag on them out on the trail.

And that is just what I did on Friday morning as I rolled into the Bosch tent to get a low down on the bikes.  On display there was every kind of bike on display from various manufacturers, each one assisted by a Bosch motor. Townies, cruisers, mountain bikes, you name it. All pimped with a growth on downtube that one would expect to be the battery and more bulbous looking bottom bracket (motor-assist) than one is used to normally seeing. Apart from the obvious “extra” bits, the bikes are 100% normal.

I was greeted by the PR guy who asked me which bike I wanted to ride and walked me through the features. Having never ridden an E-bike, I took the opportunity to ride a KTM Lycrn. A 5” travel / 27.5” w/boost trail bike that looked like it would be the most fun.

The KTM came spec’d with Rock Shock suspension on both ends including a 130mm Pike fork, a 125mm Monarch shock and the new Mavic dropper seat post that is blue tooth activated.  The shifting duties were handled by Shimano XT and the braking by Shimano Deore.

The Bosch assisted bikes also come with an Intuvia bike computer mounted on the stem. Slightly larger than a road bike computer and with slightly different functional display. The display shows you items like speed and average speed, but more importantly it shows you when you are using pedal assist, at what level you’re using and how much of the  500Wh battery power is left in the tank. There were are five levels of assist – from a little to Chris Froome levels. As you can imagine, the more you use the assist, the quicker the battery goes away.

The battery is said to be able to assist you for up to 100 miles on the lowest setting.

The Bike – with all the “extra” accoutrements is heavier. We didn’t have a scale to weigh in but would venture to guess it’s in the 45 lb. range.

The ride - during our ride on this bike we covered most of the XC course at the Sea Otter. Which has plenty of climbing but not much technical or rough terrain. So out of the gate we went. First pedaling un-assisted because we were in denial of using a motor. That is, until you get to a hill. Then, like a hit of dopamine, you push that magic button and suddenly you are generating another 30 watts of power.

But we are digressing. Unassisted Pedaling of the bike is sluggish, but not unrideable. Mostly due to its weight and not something you want to do for long spells. While the new pedaling platforms help tremendously, pedaling this bike was a bit like riding an older DH bike.

But the course at Sea Otter is nothing if not completely undulating. So before we knew it, the first hill out of pit area was upon us and our first hit of the “magic” button was experienced propelling us up the fire road hill that we could not otherwise pedal up without great effort on the bike.

Our button push was just to the first level of assist and we were still working pretty hard to get up the hill. So grab another push of button into sport mode and our speed increased with each pedal stroke until we reached the top.

Pedal Assist – Not motorized. This is a good place to point out that these bikes are Pedal Assist and require participation on the riders’ part if they want to engage the motor. There are no free rides on this bike – only easier rides.

Once we crested the top, we were ready to enjoy the fruits of the climb and haul ass down the fire road where speeds easily can get close to 35 mph on a traditional pedal bike. But the e-bike is different here. Once you surpass the 20mph mark, pedal assist is unavailable. In fact, the e-bike system shuts off completely – which we found out is pretty sketchy to turn on if your trying reach the computer on your handle bars while moving at a good clip. You simply have to wait until you slow down to re-engage the assist. So cruising down the downhill the bike acts completely normal. Handling is not nimble but it is pretty solid for a heavier bike. KTm did a formidable job of keeping the weight down in the frame to ensure it will corner.

As we continued on course warming up the legs we got to the point where we could climb pretty much any of the XC climbs on the course with the assist set to its lowest level. All we had to do, is keep the legs churning over.

We learned to trust the bike and its handling and really began to enjoy the ride until we got to longest climb of the course which we embarked after taking a short break off the bike and shooting this little video and test a camera here too.

As soon as we remounted, we began the one of the bigger climbs and quickly found we could not do it on this bike without the assist. So a push or two (okay two) of the magic button and were where flying up the climb. Major guilt set in as we passed riders of all levels at speeds that were quite frankly unfair. We found ourselves apologizing with an explanation that we were cheating on an E-bike. That when it hit us.

This is exactly what it feels like to be Todd Wells, even if only for a couple of minutes. If you ever wondered what that feels like, go demo an e-bike…

As we sheepishly pedaled the long fire road up from of the bottom of Sea Otter course, we found ourselves pulling a group of advanced riders up the hill – it was the least we could do since we had the motor and magic button. 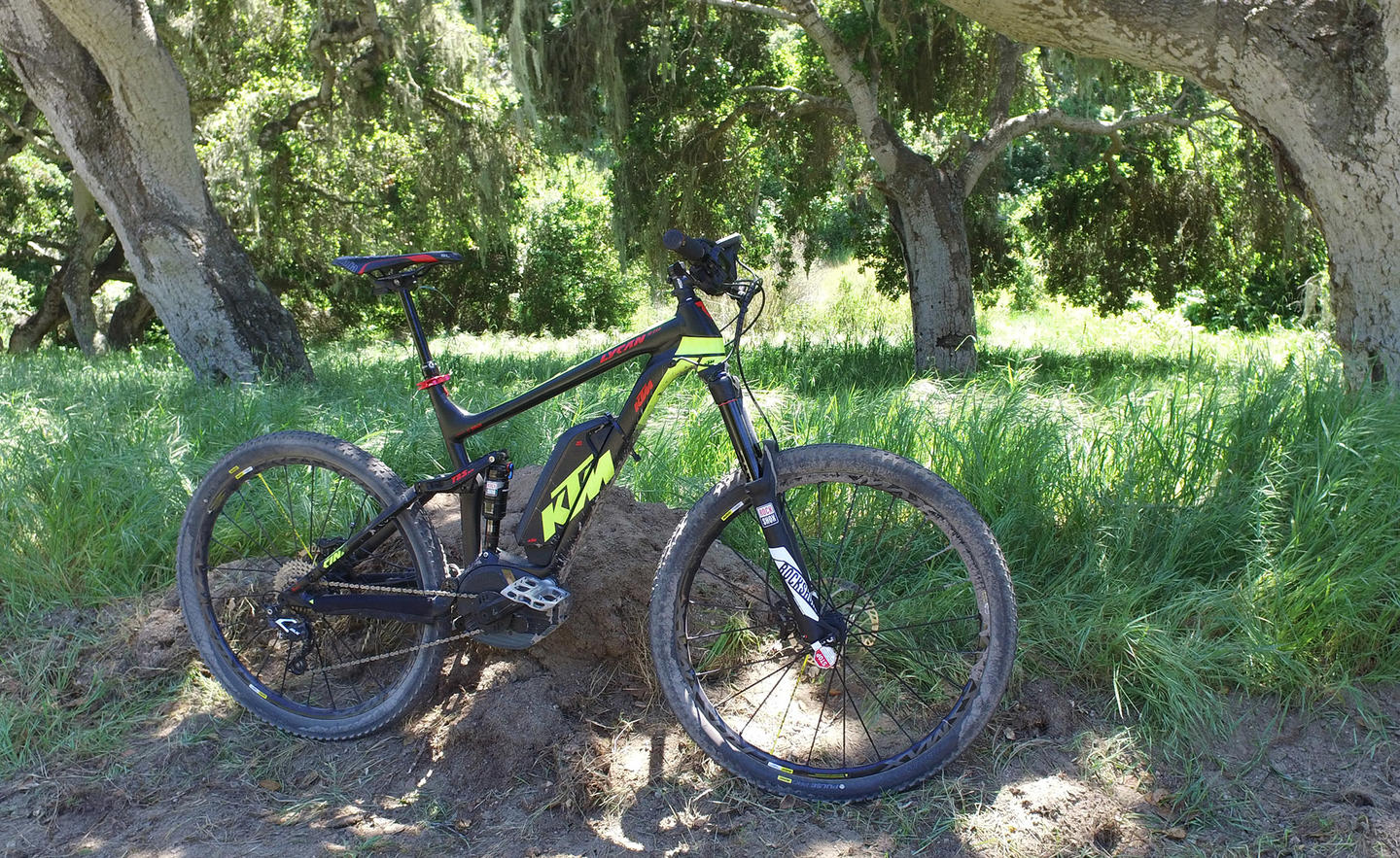 What about the rest of the bike?

Looking beyond the pedal assist, we found the suspension to be good – again not really testing it on rough terrain. It would have been interesting with the added weight.  What we did find was the Deore brakes are not up to the job of slowing a heavy bike down. Deore brakes would be just fine for a regular XC bike, but the added 10-15 lbs. of heft and some steep fast hills put the brakes to their limits. A higher level brake and even bigger rotor up front should be used for this application.

Another interesting discovery about the e-bike that should be noted was during our descent of tight switchback trails, we would sneak in a few pedal strokes to keep up the speed and the pedal assist would kick in making you accelerate into the turns and nearly overshooting them. I see this being one of the biggest things for novices to pay attention to as there is potential for injury.

The Verdict: For the core rider

Did we have fun? The answer is yes. Who wouldn’t like rocketing up a climb like a world class pro?

Was it more fun than a pedal bike – No, but not without explanation. The extra weight doesn’t allow you throw the bike around and descending wasn’t nearly as fun again because of the weight.

The final nail in the coffin is that the ride wasn’t fulfilling. It was hollow -There was no feeling of accomplishment to ride the course without suffering some. The “easy” button was too tempting to lay off of and quite frankly we couldn’t climb some of the course without it. Was there exercise, sure, but it’s easier.

One of the big rumors to dispel has to do with dirt displacement. Since there is no throttle, there is ZERO additional erosion beyond that of any mountain bike. Also, if you’re wondering about getting passed on the uphill only to get held up on the downhill (my thought) just remember, common courtesy on the trails will still win the day and yes, you will catch them going down.

Is there a place for this E-Bike and others?

The answer is unequivocally yes. The easy mark is the townie or commuter market. Using an e-bike may actually be faster than a car in some high traffic cities. With a battery life of almost 100 miles per charge, you can now easily make longer commutes without fear.

And how about adventure riding? Have you ever wanted to go on a long trip but found you were not quite fit enough to pull off 100 miles on a mtb? Well, now you can with a little careful planning. Just don’t get stuck 50 miles out, because it would be a long slog home.

The real winners here are going to be those that can now go with you on a ride and keep up. Not everyone is a hard core rider, but would like to ride with you once in a while. We aren’t talking shuttle runs here, just good old cross country riding. This may open the doors for girlfriends, wives, parents, etc. to participate.

Location: News >> E-MTB Test - Ride What is it really like?