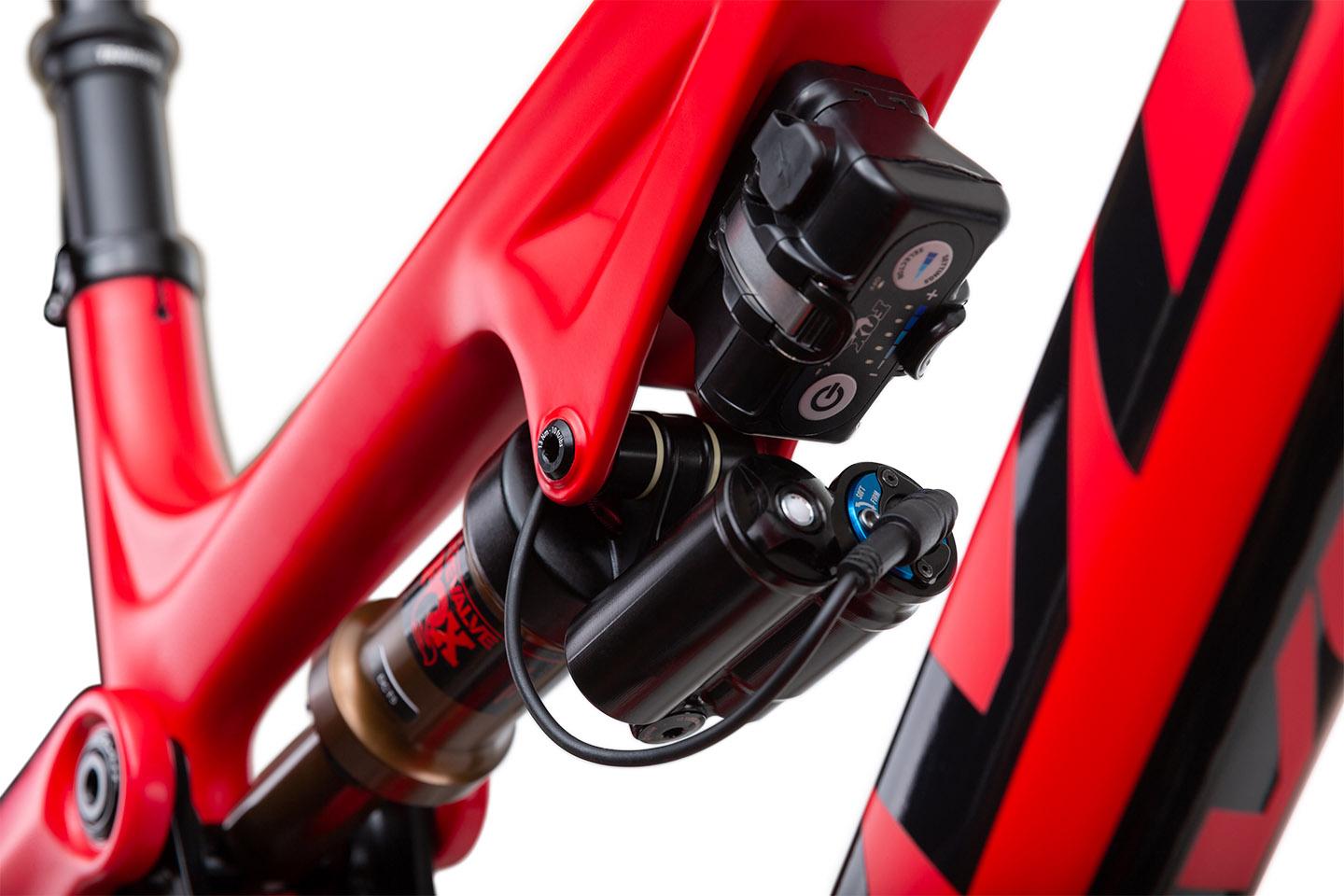 Intelligent suspension has been around for several years on race cars and even high end road cars, then motorcycles and now it has reached the bicycle industry. Pivot has (not so coincidentally just before interbike) annouced that their flag ship Mach 5.5 will be rolling out with the New Fox Live Valve technology suspension.  A technology that touts computer made adjustments on the fly. Yes instantaneously. While we have not riden the bike here is how the bike set up works

Setting the sag remains the same manual way by Pivots instructions; which is about 30%. Pivot made that part easy by including sag indicators on the rear shock. The Fox suspension still has the same 5 settings that allow for the rider to set as the please. From 1-5 with 1-being closed and 5 -being wide open.

Once you have the sag set, you turn on the Fox Live and it will automatically read the terrain you are on. The Fox Live will sense the shock's activitiy and make adjustments on the fly intantaneously to adjust the compression curve and ramp up. It is really that simple. Does it work? As we said, we don't know, we havent yet ridden one. But based on Chris Cocalis' reputation, I would say it works spledidly.

Powering it up and off.

Since this is computer controlled, that means it takes a battery and the questions of batter life will come up.  The Fox Live holds about a 16 hour battery charge of active riding.  After each ride, it is recommended that you turn the Fox Live off,  but in case you forget, the computer will turn itself off after 1.5 hours of non activity.  The battery is like a cell phone battery and have not gotten an images of the exact shape and size, but the good news is, it is rechargeable just like your cell phone. USB port and all. So the battery will get you a good week or two of riding between charges.

Pivots' press release below gives you all the corporate buzz words and we will let you read that for yourself. We do believe that this new technology from Fox is the wave of the future and when you combine it with an already great bike like the Pivot 5.5 it should be even more amazing.

If there is a downside here it is that technology doesn't come cheap. Early adopters usually bear the brundt of development costs and when you add it to a premium bike you now have a bike that rivals today motocross rigs for price. Pivot will be offering this option on their proline builds taking the MSRP range from $8,000 USD to $11,000 USD.

Is it worth it? I guess we will all have to ride one and find out.

The most sophisticated trail bike suspension ever developed, Fox Live Valve is here, and the Pivot Cycles Mach 5.5 is fully integrated and available with this game-changing suspension technology. The Mach 5.5 is already the best trail bike on the market, getting rave reviews from media and owners alike - live Valve technology takes that class-leading performance to the next level.

“We began working with Fox on this project almost three years ago when the Mach 5.5 and the Live system were in their earliest prototype stages,” says Pivot Cycles President and CEO, Chris Cocalis. “Even then in its most basic form, we realized the performance benefits and knew we had to integrate it into the Mach 5.5. The evolution since then has been nothing short of incredible.  The new FOX Live Valve system delivers even greater levels of versatility taking the Mach 5.5’s reputation as the one bike that can do it all to another level.”

Live Valve gives the Mach 5.5 an incredibly broad spectrum of suspension performance that makes it pedal and climb like our Mach 4 yet descend with performance that rivals our longer travel Mach 6. Live Valve enhances the Mach 5.5’s already incredible capabilities by increasing pedaling efficiency seamlessly and instantly while making the suspension more supple and reactive.  Incredibly, Live Valve’s computer does everything automatically and, in less time, than a blink of the eye - 100 times faster.  With Fox Live Valve the dream of perfect suspension for every part of the ride becomes a reality.

Pricing, Specifications, and Availability: The Mach 5.5 with Fox Live Valve upgrade is available now in Pro and Team level builds ranging in price from $8,199 to $11,099 USD, in all sizes, at key Pivot dealers worldwide. For more information, visit http://www.pivotcycles.com/bike/mach-5-5-carbon/.