About the Coach Gene Hamilton

Favorite Trail: If I told you they would kill me


Gene’s love affair with anything and everything two wheeled started when he was six and he got his first purple, banana seat bike for Christmas. It has been quite a journey since and he certainly never thought he would make a living on two wheels. Although he started riding bikes when he was quite young, he struggled at most sports and was not what anyone would call a natural athlete. He has been teased about his funny walk since he was a kid and never came close to passing the “Presidential Fitness Test” in school. Growing up fast (6 feet tall in the 7th grade) he wasn’t the most graceful kid and his asthma didn’t help. Despite never even winning a “novice” class race, he was at the BMX track racing every Sunday for two years in his teens.


In the spring of 1987, just a few months after learning to ride, Gene competed in the Snowboard World Championships where he finished 20th in the amateur half-pipe competition. Following that season he moved back to Virginia to finish college but continued competing on the East coast. After graduating from Old Dominion University in 1989, Gene accepted the position of Director of Snowboarding at Wisp Resort in Maryland. While at Wisp he continued to snowboard professionally and was the coach of the race team. During the next five years Gene moved back to Colorado to train with Team Breckenridge and Team Tiehack in Aspen. These were Gene’s first years being coached and it had a profound effect on his future. In 1993 Gene did his first mountain bike race and was hooked. He raced the following two years as an amateur before turning pro (downhill) in 1995.

In the fall of 1996 he accepted the Head Snowboard Coaching position at the Steamboat Winter Sports Club. This was his dream job and really enjoyed seeing the kids that he coached grow and become more confident. Part of his job was to stay on top of the sport and become the best coach he could be, he got paid to take coaching courses! USA Skiing and Snowboarding had an amazing coaching staff and Gene took full advantage of the courses they offered. The next three years were spent coaching snowboarding in the winter and racing mountain bikes in the summer. After nearly 10 years of spending the winter living in ski towns Gene tired of the cold and moved to the warmer climes of Boulder, Colorado in the fall of 1998. 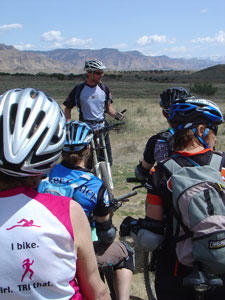 BetterRide was founded that fall and it has been quite an adventure over the last 10 years. BetterRide has grown to 15 certified coaches.  His mountain bike coaching highlights include coaching many top pro racers, top junior experts and  many passionate riders who just want to get better. He is a pretty good racer too.  In 13 seasons as a pro mountain bike racer, Gene has won a Silver (2002) and two Bronze Medals (2006, 1999) at the UCI World Masters Championships.    Most weekends, you'll find Gene racing DH Bikes or coaching a sold-out skills camp.  On the days in between, he travels but still manages to ride his bike for fun and practice almost every day.